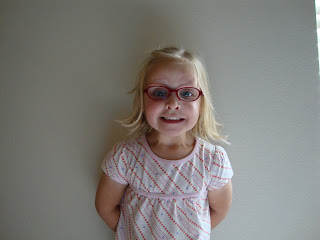 With all of the craziness of moving and not having internet for a week, it is now time to get back on the band wagon. Ruby got her glasses two days before we moved so these are pictures two weeks late. When she first got them she kept trying to peer over the top of them so she could see the way she used to but we kept reminding her to look through the lenses. She also told us that everything was blurry. (They asked her if things were blurry at her appointment and she said "what?")She had no idea what they were talking about but I think that was her way of saying she was seeing things differently. She has been really great at wearing them and it is amazing to me the things she can point out that see sees. She now reads all of the letters to me on construction signs while we are driving home from school. She was never panicked about flies before but now she can see them buzzing around and she adamantly tells them to go away. A whole new world has opened up for her and it is the most thrilling thing for me to see. We received a letter from her Dr. at Primary's and it helped me to remember some of the things he told us, since it was such an information upload that day. In her right eye she is 2o/50 and her left she is 20/60, along with her other eye problems.

After we get home from preschool we go through her bag and talk about the things that are in there and what they did that day. Ruby was delighted when she pulled her monkey hat out of her bag and started running around making monkey noises. It was funny. So here she is: 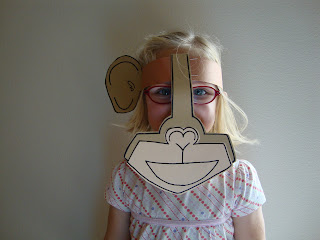 I had my first Dr. appointment on September 15th. I got to see the baby on the ultrasound machine. The Dr. says the baby looks beautiful. My due date is April 10th. They did the beastly blood draw and added a new special to the line up, a urine sample. It was pretty difficult to produce said sample when I did my business before I went to the lab and wasn't expecting such a treat. I asked if they had water and they sent me to the drinking fountain. The best part of it all is that I tried to give the woman at the desk the sample cause they didn't tell me what to do with it. Apparently there is a metal "urine sample receiving door" in the bathroom. I blushed and returned it to it's proper place.

Ruby is constantly putting her face to my belly and saying "Hi baby." Emma likes to follow suit. I have two more appointments until the gender identifying ultrasound and we will find out the gender on our 5 year anniversary. It makes the day all the more special.
Posted by The Romig Chronicles at 12:59 PM