No matter what our circumstances may be, time marches forward and life continues. It is a good thing. Jed has had a couple interviews and yesterday he had one in the morning, and was asked to come back for a second that afternoon. So he stayed up in Sandy and I got a call about 4:30 where he told me he accepted the position. He will be working for a multi-insurance broker firm, that helps people customize their insurance to their exact needs. I could go upstairs and ask the companies name but don't want to bother Jed while he is studying for his insurance license. It is commission based, and normally that would make me anxious, but Jed felt good about it, and he is happier than I have seen him in a while. Not that he has been grumpy or anything like that but more so that his sense of purpose has returned and he is looking forward to this new challenge.

Eli turned 5 months on Sunday. He is such a joy to us. He is back in his hard casts at night to help extend his fingers so they are less curled. He is doing well with them and we are seeing so much improvement. Well it is improvement to me. He is starting to lay his hands flat during feeding, grabbing his clothes and blankets, he took the spoon from me yesterday whilst eating his pears, and he is gaining strength in his hands, I can see it in the way he can hold his toys for longer periods, and can also pull his jiggly elephant down. All of these things to me are the glimmer of hope that he is going to continue to improve. He tries so hard and I love this gentle boy so much. he also cut his second tooth that afternoon after conference, I then understood why I didn't catch a word of Boyd K. Packer's talk. :) 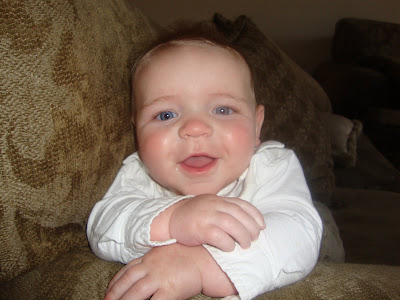 As for his seizures we started his medication on the 15th of August and he had a month period of respite from them. Then on the 4th of September he started having them again. Not the kind where he convulses and falls asleep after wards for long periods of time, which is good but they are still happening, he has been having about 3-4 a day the medications seems to subdue them but it's not stopping them. My guess is that he he went through a period where he wasn't having them and then when he started having them, his med dose isn't high enough to stop them. It is frustrating to me, but I am grateful for the mildness of them. We have an appointment next week so we can discuss the options with the PA.

We had Stake conference on Sunday. It was broadcast from the Marriott Center on the BYU campus. It was incredible. I have been thinking so often about the impressions I received there. I am grateful that the words that were spoken helped me personally. I truly believe that the speakers were inspired to deliver the messages they did and I also left with a greater appreciation for our pioneer heritage. The Gospel of Jesus Christ blesses my life everyday. It brings me so much happiness.

That afternoon we took so pictures of the kids. Eli refused to sit, hence the look on his face, he was arching up so he could stand. I have a feeling that future picture takings will be in this likeness. They are all in such a funny stages, and I know that these very poorly composed pictures will bring me giggles and sweet memories for years to come. 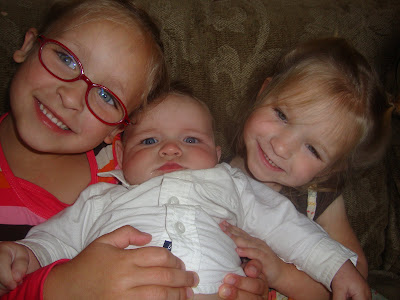 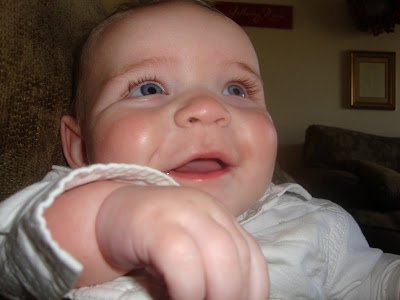 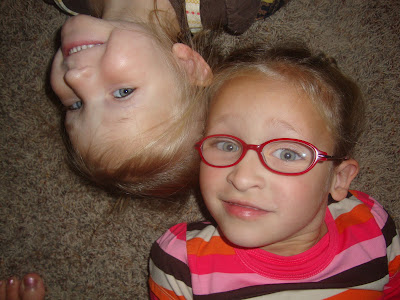 Posted by The Romig Chronicles at 9:54 AM