We got snow Friday night and so Saturday morning came and I went on a grumpy cleaning tirade. I let things go for a long time and then something in me snaps and *I just have to* organize the toys that have been bugging me but I just close the door on them for a later time. So I corralled the poor citizens of our home and told them no snowman making until things are picked up and mommy's nerves were settled. I am sure I stomped a little too. After my cleaning grumpies had passed everyone but Emma was allowed to go outside, because I decided I couldn't make the rest of the family wait until she picked up her portion. (When you look at the pictures you will notice she is outside in her pajamas and snow boots. She snuck out side when I was videoing Jed and Ruby. And I just let her stay.) Eli was all dressed for the weather, but hated the feel of the snow suit so he got to come inside and then someone nameless person left the door open and he kept coming to the door crying and was quite pantless. Yes dear readers, I believe in being on the ball, meeting everyone needs immediately and making home a heaven on earth. 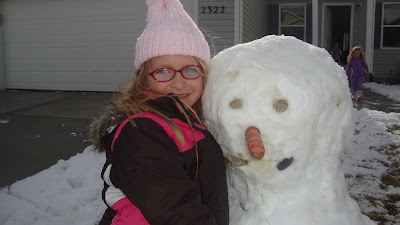 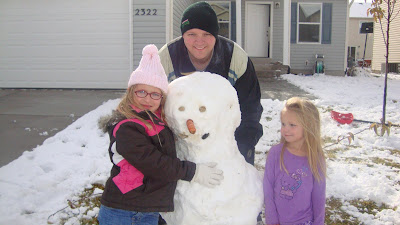 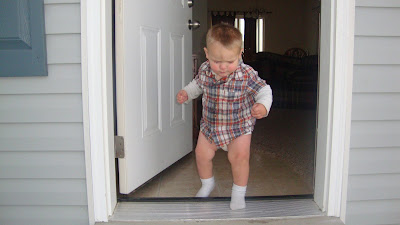 The kids had fun and our afternoon turned out to be quite pleasant. The girls had a birthday party to go to that was "Pinkalicious" themed. Jed and I attempted a nap only to have Eli wake up from his 5 minutes later and ended up doing dishes and playing with Eli.

At 4 we dropped the kids off at the neighbors and returned home for our anniversary date. It was lovely. We have dated at home for years but there is something quite nice about not having to do so after the kids are in bed. We made dinner together, played hand and foot (which I lost horribly) and cuddled and watched a movie. It was a great evening. We have been married for 7 years. I love my best friend. More than anything I look forward to our letter exchange every year. It is the best. 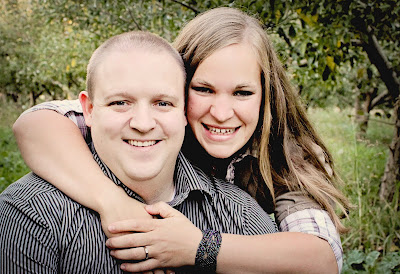 Sunday we did our usual drill of church, lunch, and naps and spent the evening playing dominoes with the girls. Emma won the first round and was waving her little fingers in the air saying "I won! I won!" I asked her how victory felt and she paused for a moment and said "He's my boyfriend." she is a hoot. After our game Ruby read to Eli on the couch. 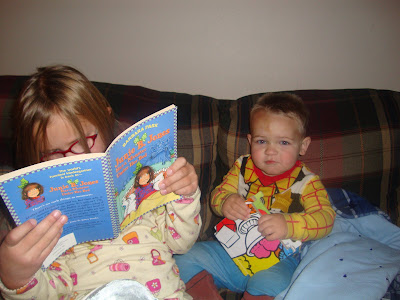 It was such a fun weekend. Since we got the snowman up the girls have been constantly checking frosty's status. Today I was out on a walk with Eli when I noticed a boy in our yard destroying the snowman. I had a friend with me and she gave me the courage to do something about it. The boy saw me coming and hurried back to his friends. I called him over and made him fix the snowman. I know that it was just a snowman and it was melting anyway, but I knew my girls would be upset. I sat outside and watched him fix it for 15 minutes and basically told him to respect other peoples things, and then I told him to go. I am a mama bear.
Posted by The Romig Chronicles at 8:58 PM