Eli is still breech, but one positive note is that he is spine up. Yesterday he was laying on his back and today he is on his tummy. If he stays this way it will make our chance of success during the EV even better, because it gives the Dr. something to hold on to and give them a bit more leverage.

As we were getting ready to leave, I mentioned to the nurse (since I was seen by the ultrasound tech) that Eli's movement didn't seem the same as before his burst of energy when he flipped. I attempted last night to do the self check where you eat something and then count movements for an hour, however I fell asleep before I felt even one movement. They immediately suggested monitoring me for heart rate and movement. We stayed for about an hour longer, and enjoyed the smorgasbord of juice, pretzels and almonds to encourage him to move since I hadn't eaten anything since last night. They said he looked really good, and that everything was ok, but to not hesitate for a second if I start to notice no movement or I have a gut feeling that something isn't right.

I love the office staff there and they always take good care of us. They asked what we were naming the baby and for some reason got the urge to do some name meaning research. One gal even called her husband to get the scoop on the Jedediah that is in the Bible. While we were waiting for our appointment they told us and everyone else sitting by us the meaning of his name and said that he was going to be a special baby. :)

All of this hurry up and wait business seems to be taking it's toll on Jed. I know he is so anxious to get our little boy here. He has been so supportive through all of this and keeps my hope up that he still may flip on his own. He is good at seeking out the positive points. I keep thinking about the little babies we saw in the nursery at the hospital on Tuesday. They were so little and I look forward to when we will have a bassinet with our name on it. :)

It feels like I have been lacking in pictures lately so I think now is a good time to post newborn pictures of our girls. A little treat at the end of my verbose posts. 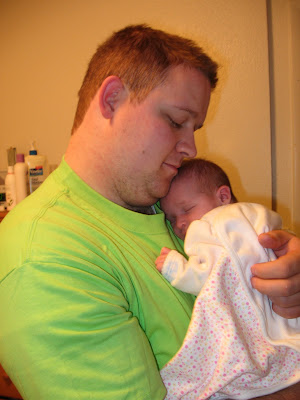 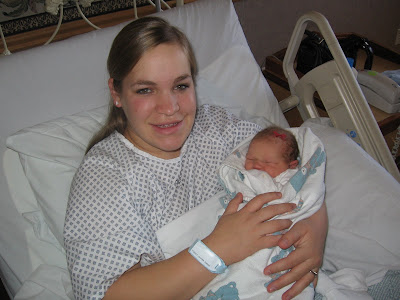 Posted by The Romig Chronicles at 10:42 AM