If my blog were a fruit it would be overly ripe. I have had a post swirling around in my head for a while now but just haven't got it out until now. I also haven't been getting on the computer as much since Jed has been home, which I consider to be a good thing.

We borrowed Coraline from my mom and it came with 3-D glasses. I was amazed that it worked on our t.v. the girls love it and one of their new phrases is "Don't go in the rain Coraline Jones." It make us all laugh due to the inflection in their voices when they say it. 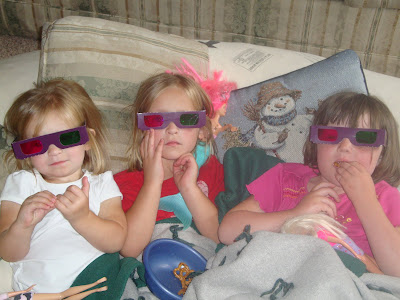 I took this picture on Eli's 4 month mark and I decided that a lying down picture would be best. When I prop him up against something his neck disappears. I guess that is what happens when you weigh 17 lbs at 4 months. 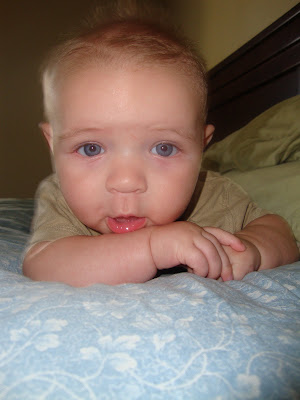 A couple weeks ago Ruby went to the Utah County fair with her friend Hannah. I was initially going to go and then when Eli started having seizures I decided it would be better not to. Hannah's mom then offered to take Ruby with her. She had a wonderful time. She loved the face painting the most and it was so fun hearing her description of things. Tina told me that Ruby saw a woman in the bathroom with short spiky black hair with red tips. Ruby approached her and told her how much she loved her hair and that she looks like Rufio. Coming from Ruby that is a big compliment. 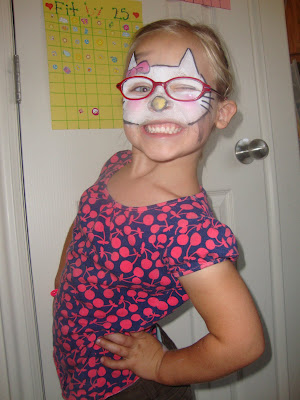 Eli started solids about 2 weeks ago and is loving it. I think it is amusing that I always forget how messy they are in the beginning. I always think that they aren't ready and then give them a few days and they have it down. He has also had squash. He loves it. I make his baby food and I love it, when Brody was a baby I had Sarah save his Gerber food containers they work perfectly for storing and freezing the food. 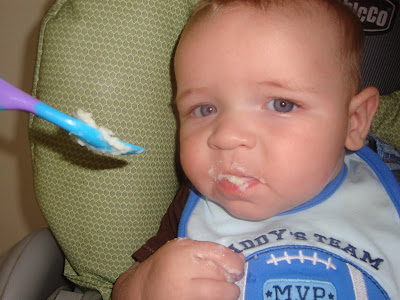 Very often I find Emma in the Exersaucer. She probably still meet the weight limit. But when ever she gets into it she is on her knees. 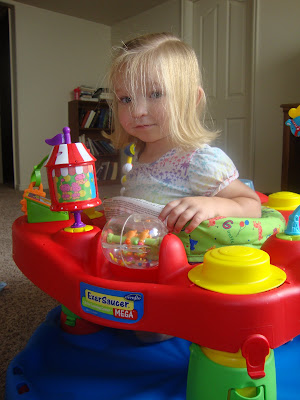 Eli loves being in his Johnny Jump up. He enjoys being either upright or held, he has been rolling over ever since he as a little under 4 months. He is so good at it but gets mad that he can't get back over. He was having a sad day last week so I decided to get his jumper out and it made him so happy. 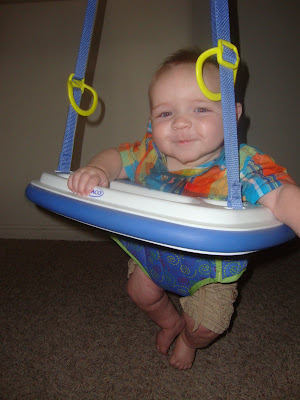 I recently finished my wall hanging. My mom gave me a gift certificate to Pineneedles and I was able to get everything I needed for it for .15 cents over what the certificate was for. I got it finished a little after my birthday so I got it quilted with my birthday money. The pattern name is Simply Silly. The thing I love about it is that the fabric line is called Make Life... and then it has different words all over it like, simple, silly, fresh, beautiful, happy, sunny ect. It is now hanging in my kitchen. It reminds me to try to make life exactly what I want it to be. I am so happy with the way it turned out. 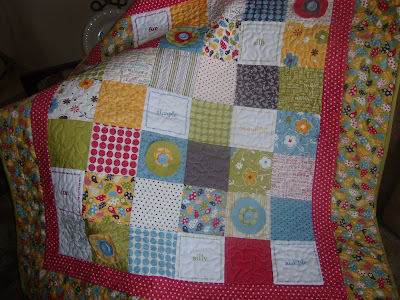 Posted by The Romig Chronicles at 8:32 AM